What's the matter with water?

Water security is fast becoming one of the biggest talking points in international development and beyond....

HOW MUCH WATER DO WE HAVE?
Over two thirds of the Earth's surface is covered by water - hence the term 'Blue Planet'.  Great!  But... the vast majority of this is salty - only 2.5% is fresh water, of which two thirds is frozen in glaciers and ice-caps.   Oh, and around a fifth of this unfrozen fresh water is in remote areas..... All in all, we have less than 0.08% of the Earth's water available to us.

SO WHAT'S THE PROBLEM?
Water usage is increasing every day. And so is the population. Many of the areas where water is shortest are also areas that are facing the largest growths in population, particularly sub-Saharan Africa.  But the issue isn't just about the amount of water per person, it's also about a lack of capacity or technology to be able to capture and use what is available - and to conserve it for future generations. This is exacerbated by deforestation, as trees are natural water captors.

Below is a map created from the world 'Water Poverty Index' showing which countries face the worst "water poverty", compounded from data on resources, access, capacity, use, and environment:

WHAT ARE THE CONSEQUENCES?
Too many to mention! Here's just a few key areas...

Health - not enough clean water to drink leads to dehydration, the effects of which include fatigue, muscle weakness, poor concentration, headaches, and dizziness. Unsurprisingly, these health effects also have a knock-on effect on both productivity at work and in education: it's difficult to concentrate on your lessons when you're feeling dizzy and have a headache!

Education - the shortage of access to water also means many people, particularly children and women, have to walk miles each day to fetch water for their families.  This prevents children from attending school, not to mention the sheer tiredness when they do get to their lessons!

Dirty water - lack of access to good water can mean people are desperate enough to drink anything, leading to disease, which leads to more missed days at school or work.  Diarrhoeal diseases cause nearly one in five child deaths

Agriculture: crops cannot grow, and animals cannot survive without a minimum of water.  This means families who rely on agriculture (in Kenya, around 75%!) may not have enough food to eat, let alone to sell for income. International events such as the World Water Forum are seeking solutions on the global stage, with discussions and input from governments, the UN, and NGOs.  2013 is also the UN International Year for Water Cooperation.  What's this going to achieve? Political will is very important, as this blog points out, and this has helped with increasing the focus on access to water, with the Millennium Development Goal on water being reached last week. But it's difficult to get away from the feeling that a lot of the talk is just that - action lags behind.

Technology...
There are a number of simple technologies that can address access to water.  Some of the most popular with  NGOs and charities, both in the past and today are boreholes, which are relatively inexpensive.  But, as this commenter points out, boreholes require a lot of maintenance by communities, many of whom cannot afford either the time nor the money required for this.  Worse, boreholes reduce the amount of water left in the water table - meaning once the water is gone, it's gone.  The problem is merely postponed for a later generation. 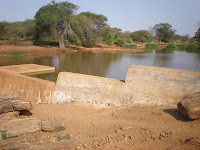 Quest works with Excellent Development on sand dams - small-scale dams that do not significantly disrupt either the environment or displace communities like large dam projects.  These allow water to build up as the rains come, meaning that the community can access the underground water through small wells and foot-pumps, throughout the year.  And even if a lack of rainfall occurs, this doesn't have to mean a drought for the communities.

BUT WHAT CAN I DO?
Water sustainability is an issue we can all do something about....

-Take notice of what's going on - and help to spread the word, like these students at Santa Rosa School, Sullana, Peru, with their project 'Water the New Petrol'.

-Volunteer on a water sustainability project, like the one Quest runs.

-Simply use less water!  Apparently, 20 litres is roughly how much water is generally needed in a day per person for drinking, cooking and washing. On average, in the UK each person uses 150!  Saving water doesn't have to mean going thirsty though...